Does anyone drink Altbier? I think I'll have a Tree Hugger.

I was pleased to see Terrapin Beer Co. win a Gold in the Great American Beer Festival, 2013 (GABF). Just one state away in Georgia, I consider them local.  Both myself and my wife enjoy their beers.  At this time, my wife would call Terrapin her favorite brewery. 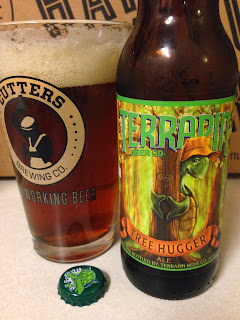 Their Tree Hugger Ale won in the German-Style Altbier category.  Congrats to Terrapin!  Now what exactly is an Altbier again?  Like an alternative type ale?  Something between straight up Rock and Roll and Indie music?  Not the main stream, but Alternative.  Right?  (Ever notice the Alternative section on the music isle is one of the largest?  Hmm?)

I'm not sure I've had an Altbier.  Perhaps once (or twice) at the German restaurant, but most of those brews are lagers or wheat ales.  The style guidelines call it malty with little to no hop flavor or aroma.  A clean beer because of the highly attenuative yeast.  Sounds good, I guess.

Big surprise here.... I was at the ABC store looking for beer.  And sure enough, with the other Terrapin beers, was a 6 pack of the Tree Hugger.  (Well actually a 5 pack, with a 6 pack behind it.  I guess someone wanted to try one without committing to the full pack.  I like to commit to the full pack.  Just sayin.)  So I arrange 6 to the pack and along with the Ten Fidy in the Growlers (nice huh?) went for the purchase.

So what?  It was good.  It was very nice.  Full of flavor.  A nice bitterness at the end.  A clean bitterness.  At 5.1% ABV, you could enjoy several of these during the game, or while mowing the lawn...or just about while doing anything.

Malt through and through, with perhaps a little caramel coming out.  Not sweet.  Well balanced.  Pours a nice deep amber color, with a nice slightly off white head.  This is a style I could get to know.

As beer geeks (Wouldn't it be fun to call ourselves "aficionados"?  Pinky finger out.) we tend to go to the extremes.  Double IPAs, Imperial Stouts, Pumpkin-guava-rosebud-chocolate-wheat-imperial-black-______ (Fill in the blank underlying style).  In all our excitement, we often miss out on the classic styles that are quite enjoyable.  Let me introduce again the Altbier.

Alt, in this sense, means old.  Not to be mistaken as aged, rather old as in brewed in the old style, with top fermenting ale yeasts.  Before lager yeasts took off in the area, ale yeast was used (and of course still widely used in many types of beer).  The alt style beer was in a sense the precursor to some of the more common German style lagers of today.  And even today, the name isn't truly reflective of the process.  As you will see, lager yeasts are used in two of the three sub-styles.

The BJCP Style Guideline (2008), Category 7: Amber Hybrid Beer has the following styles listed.  Northern German Altbier, California Common Beer, and Dusseldorf Altbier.  There are some slight differences in the three styles, and history is part of the differentiation (along with geography).  In short, I sum up the differences like this.
ABV in the 4-5 range.  IBUs surroung the 30 range.  My belief, after having just one of the Tree Hugger, is that it is most inline with the Dusseldorf Altbier.  It is, after all called an ale.  The others would really be considered lagers (or steam, but you can't call it that.  Thank Maytag.)  And the taste seemed to line up with the descriptions, although I can't tell you if it were Spalt hops of not.

My next brew will most likely be something I can call an Altbier.  Maybe I'll call it the Dumbledore Altbier.