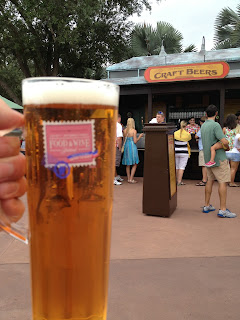 This is the latest in the 3 Part Series on the beers for the upcoming 2013 International Food & Wine Festival at Epcot.

We've reviewed the Destinations featuring what we've termed the Obligatory Country of Origin Beers.  We've examined the Classic International Styles beers to be found in Germany, Belgium and in the UK.  Now it's time to talk about Craft Beer.  Or should be be a little more precise, American Craft Beer.

There is a tendency to poo poo on American beers, but we need to look at the growing fringe of that industry.  I'm not talking about Budweiser, Miller or Coors here.  We are talking about beers crafted by people who love beer, who brew traditionally, who use quality ingredients, who are independent.  There are quite a variety of beers present this year.  Of the 30 Destinations for 2013, 14 of them feature some sort of beer.  And 5 feature what we've categorized as Craft Beers.  Let's check them out.

Hops & Barley:  You'd expect beer at this Destination.  Hops & Barley is found in the American Adventure Pavilion, on the far side (or center) from the gateway to the worlds entrance to the countries' section of Epcot.  It is obvious that there is a contract with Samuel Adams here, and throughout the year Epcot serves the Sam Adams Seasonal beer at the Fife & Drum kiosk by the American Gardens Theater.  Let's look at the list.

The Hops & Barley kiosk featured seven Samuel Adams beers last year, plus an Angry Orchard Hard Cider (also owned by Samuel Adams).  I think only 4 were on tap, and the rest in bottles.


Terra: This is the Earth centered Destination, 2013 being it's second year, with organic and grown type food.  Featured at this location is the Napa Smith Organic IPA.


Florida Local: This Destination is a relative newcomer as well in the last couple of years.  Along with locally grown food selections, this destination has some local craft beers on the menu.

Hawaii:  This is a fun Destination for food as well.  The Pork Slider is great!  From Hawaii, you would expect nothing less than Kona Brewing beers.  The featured Kona beers last year at this Destination were the Pipeline Porter and the Big Wave Golden Ale.  2013 will be the same, if the list can be trusted.  These are two solid choices.

Craft Beers: Ah, yes.  This is the way to start off the day at the Food & Wine Festival.  As you walk across the bridge into the World Showcase, this is the Destination you will come to first, located on the right side.  Get in line, get your craft beer, then walk around to the right.  You will see Hawaii soon and then the UK further down...  A good beer trail of sorts.

Eight craft beers are to be featured, and they are offering two different "beer flights" allowing for even further tasting.  Let's list the beers. 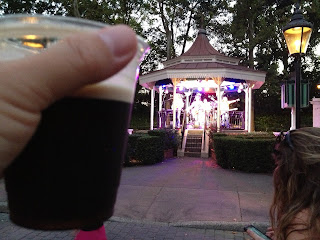 I like the list.  There are a few differences from last year, and I believe it is an improvement.  It's not the stellar list a Craft Beer Geek would desire, but you have to remember, this is for the masses, and a good sampling of true Craft Beer will contribute to the growing enthusiasm for good beer.

From this list... What is missing?  What would you like to see more of?  Who or what shouldn't be on there at all?

I'm interested to dive into this list more and look into some of those questions, to talk about the breweries and the beers...to talk about why this list is a good list as a whole for this year.

Here we have 17 of the 41 beers listed as Craft Beer.  Not a bad selection.  Let's get excited about this year's Festival.