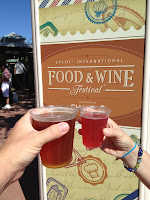 The 2013 Epcot International Food & Wine Festival starts on September 27th and runs through November 11th this year.  We are reviewing the menu and classifying the beer featured this year.

A few days ago we reviewed what we've called the Obligatory Country of Origin Beers, 8 in total.  Today we'll look at the beers from some of the traditional beer and brewing countries.  We will cover 4 Destination and 14 beers.

From the above list, the Germany Destination will also feature the Oktoberfest and Darkon.


Belgium: The Belgian beers are most interesting and something to get excited about, until you realize the examples here are all owned by Big Beer, and are the mainstream selections of Belgian Style beers.
The Leffe Brune is the newcomer to the list and a solid brown ale (Brune).  It will be my choice from this Destination.  Second will be the Blonde.


Scotland:  Scotland is a new Destination for 2013, featuring a traditional style Scottish Ale, Innis & Gunn Original, from Edinburgh, Scotland.  At 6.6% ABV, Beer Advocate (yes, switching sites) rates this at at 85.  This will pair well with the food selection at this Destination as well.

The following menu details come from the Disney Parks Blogs posting.  In fact all the menu items listed herein come from the same posting.
Of the list above, I think I'll go for the dessert with the Innis & Gunn Original.


Ireland: See if you can guess the beer from Ireland.  Yep, it's Guinness Stout.  Get it here or year round at the Rose and Crown Pub in Epcot.
There you have it... the 14 beers which we've categorized as the Classic International Styles.  I've excluded the Destinations of Hawaii (American, not International) and the American Adventure (American also), which both feature some craft beers.  American Craft beer is nothing to be embarrassed by.  In fact, it is quite the opposite!  The long history and tradition may not be as old as those of the countries listed with the lists above, but quality, flavor, and creativity which has evolved in the American Craft Beer movement is quite exciting and has been a unique addition to this Festival.

In Part 3 we'll cover the American Craft Beers which will be featured in the 2013 Epcot International Food & Wine Festival.