Craft beer in a can.  It's all the new rage!

At first look, it may seem crazy.  Why would anyone want their craft beer to look more like the bland cheap light lagers brewed by the "Big Beer" companies?  Or is it just a case of liking the low tech, such as the punk music with a true "hooked up a mic in the garage" sound, or the hipster kids pretending PBR is great tasting? Perhaps this shift is economic in nature?  There has to be a reason, right? 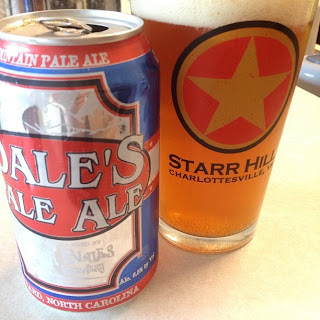 Crazy?  I don't know.  It does give the opportunity to use a larger graphic on the packaging, which can have benefits.

Ready to dive in?  The enemies of beer are light and oxygen.  Lets look at these two enemies and how each of the packaging options deal with them.

Why does beer come in brown bottles?  The ultraviolet light will affect the hops, turning the beer skunky in flavor.  It is a phenomenon known as getting light struck.  Brown bottles will filter out a lot of the ultraviolet wavelength of light.  (Blue bottles?  They let in the ultraviolet light...not a good idea with beer.)  Ever had a Heineken, with the nice allure of skunk?  Yep, that is the flavor I'm referring to.  In some styles, people pretend it is desired, but in most it is considered bad and an off flavor.  The green bottles are better than clear bottles though.  I like a Newcastle every now and then, but the bottle bugs me.  (And there are ways around the light stuck problem, but it is to be found in the laboratory.)  Beer prefers the brown bottles and to be stored in dark areas.

With a can, there is zero light.  Bingo!  The can solves the skunky beer problem.

Is oxygen bad?  Yes it is, at least for beer purposes.  Oxygen degrades things over time.  (Not going to get too scientific here, partly because I don't know all the reasons and also because you probably don't care.  Nuff said.)  It is only good for beer (wort) early when first pitching the yeast, as the yeast needs oxygen to live.  After that, care must be taken to avoid exposing the beer to oxygen.

With bottling homebrew, the head space in the bottle is normal atmospheric air, containing oxygen.  Many of the caps come with oxygen absorbing plastic lining, which the skeptical side of me thinks is just a marketing trick.  But maybe not.  Of course commercial bottling facilities have ways to limit oxygen presence both inside of the bottle and the can.  So what is the difference?  Even the best sealed bottle cap will have some tiny leaks.  With the can there are no leaks at all.  It is a totally closed environment.

Cans will get a pass in those locations, like the beach or a municipal park, where glass containers are not allowed.  No...that does not give you license to actually drink straight from the can.  A glass (or plastic) container will always be better for drinking.

Are cans just a fad?  It seems to be more of a trend.  I still like the glass bottles, but I'm learning not to fear the cans.