We are talking about the 4 basic ingredients to beer, of course.  We first focused on Barley, followed by Water, and today we'll talk a bit about Hops.  Humulus Lupulus.

What makes beer bitter?  Yep, it's the hops.  Why is bitterness important in beer?  Balance.  Are there other reasons for the hops in the beer?  Two immediately come to mind.  Hops act as a preservative to the beer, giving it a longer shelf life.  They also can impart flavor and aroma, adding yet another layer to the vast diversity in beer.
We used a musical analogy with barley, stating that various types and combination of malted barley can act like chords in music.  It can be the same way with hops.  There are many variations in hops.  And many of these variations will act differently in beer depending on the length of time they are in the boil upon initial brewing.  In short, the longer the hops are in the boil, the more of the bittering acids in the hops will be imparted to the beer.  Hops added at the end of the boil will add mostly aroma, and during the middle of the boil (20-30 minutes) will add considerably to the flavor of the beer.  Some beers will have hops added during fermentation, imparting aroma to the beer.  This practice is referred to as dry hopping.

In brewing you will hear terms like Bittering Hops, Aroma Hops and Flavoring Hops.  While some varieties are better at one or another, many hops can be used for two or even all three of the categories.

The flavors in hops range from piney, to citrus, to earthy, and every combination between.  The diagram below I found online, but it is a chart that is found in the book "Brewing Classic Styles" by Jamil Zainasheff and John Palmer.  It shows the variations in flavor in numerous type of hops. 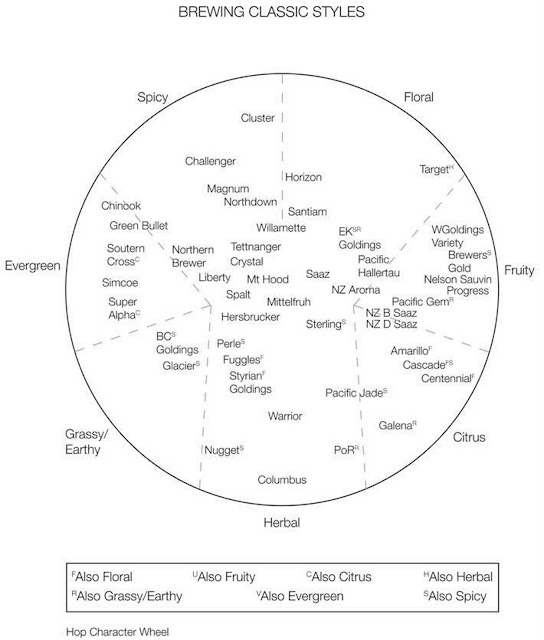 There is much to learn and if you are interested in a biology lesson, you are in the wrong blog.

Most craft beers will have two of more hop varieties, and will have them added at different times throughout the boil.  The possibilities are almost endless.  For best results, consult recipe guides or books, of simply do some research.  Most hop varieties have the traditional styles that they in which they are commonly used.  If trying to brew to style, don't get overwhelmed, simply find the several traditional hops used in that style.

Now that we spoke about barley, water and hops, we can create a wonderful substance called wort.  Now to convert the wort into beer, two things remain.  Yeast and time.  We'll talk about yeast in Part 4.