Maybe the problem I have with beer reviews is that I tell myself I'm not good at beer reviews.  I can't pick out the difference from grapefruit to that other normal citrus.  Bubble gum and banana and cloves, or it is nutmeg?  While I try to pretend I know my hops (or at least learning), I can't with any certainty declare this or that hop just by tasting a beer.  How do the others do it?  Or do they just state things with authority and hope that others will go along with the plan?  Hmm.  Perhaps a little of both. 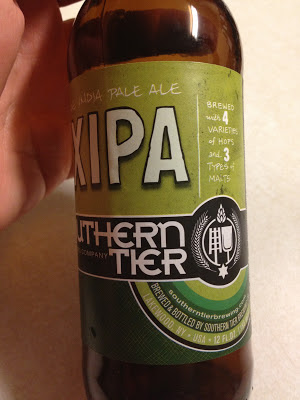 So, now that it's clear I'm no good at this, or at best just spouting off a bunch of impressive sounding bunk... here is my take on the 2XIPA, from Southern Tier Brewing.  Southern Tier... must be from the south, right?  ...or is it New York State.

Heavy Aroma.  Not flowery or overly pleasant.  It has a light golden color, with great clarity.  A soft white head coats the top the whole way through.  Mouthfeel is OK...a little thin.

I get bitterness, but it's not overwhelming.  Decent flavor overall.  I am looking for more of that hop sweet balance though, which can be found in some of my favorite Imperial IPAs.  I would like more of a lingering finish too.  More dry hops, more late addition quantities please.

It's not a bitter bomb, but that sweetness that I like so much in an Imperial IPA is lacking somewhat.  I like the thought of stating 4 hops and 3 types of malt on the side of the bottle.  But which hops?  Which malts?  Inquiring geek minds want to know.

There are a lot of Double or Imperial IPAs out there, and while some are terrific, others just don't have that magical special something about them.  This is a good beer, but it is missing some of that magic.

I do really like the Southern Tier logo!  Check out more from this brewery.
Posted by Unknown at 8:00 AM