I recently wrote about the importance of storing IPAs and drinking them fresh.  Changes in temperature and age can have unintended consequences to these highly hopped beers.  Check it out here for more information. 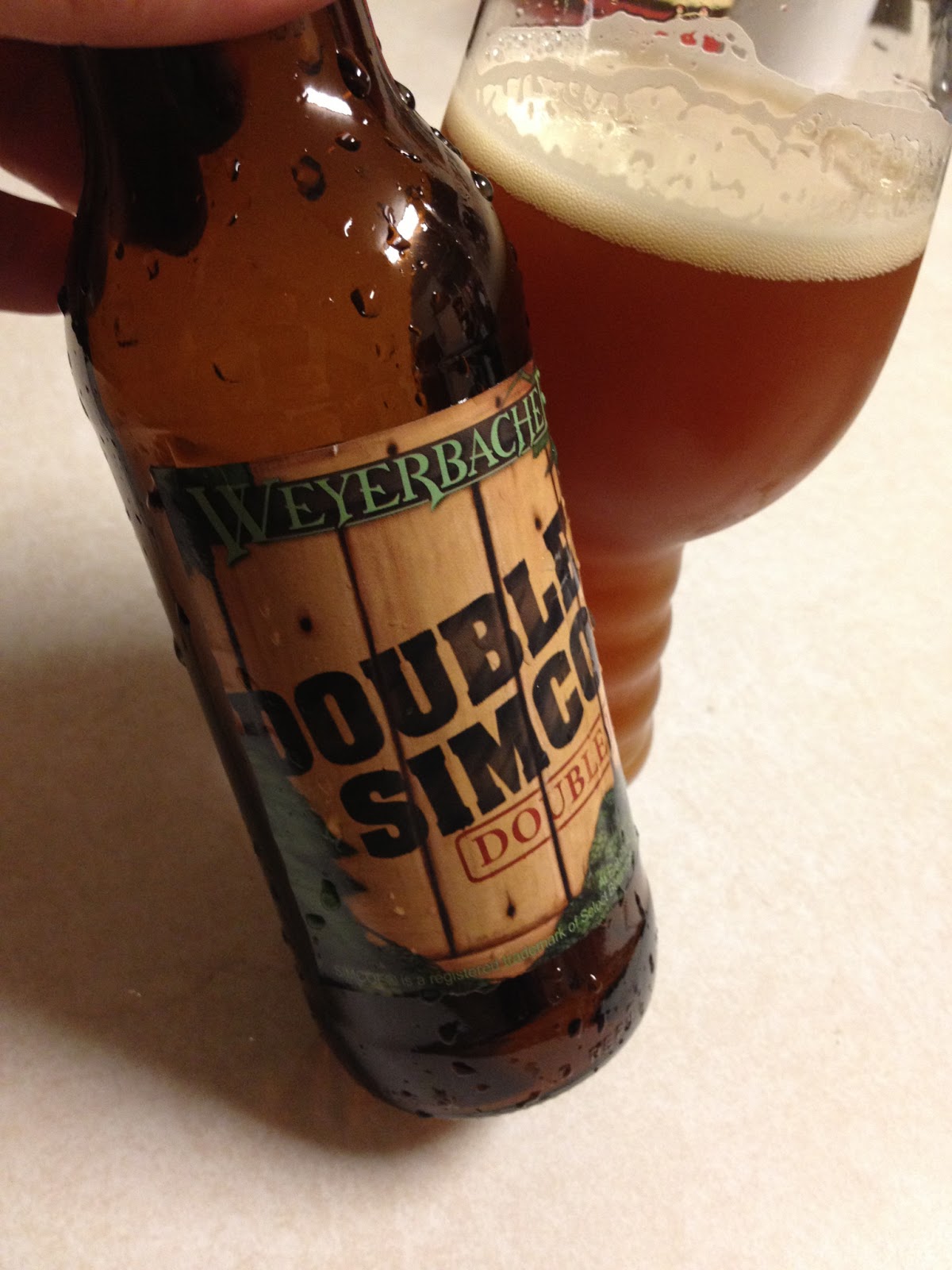 I can't remember if this Double Simcoe went to the tasting with me or came simply from the closet to the refrigerator. I can say it was still very drinkable... but not perfect.

This Double Simcoe IPA by Weyerbacher was probably better fresh.  A little oxidation combined with the Simcoe hops aroma is probably the reason why this hop has earned the "cat piss" moniker.

We'll start in the middle... Simcoe. Simcoe is a hop variety, of American birth, Washington State, to be more precise.  It is important to establish that it is only Simcoe in this beer. Single hop. Most beers will utilize two,or more hops, to get the bitterness and flavor profiles from then as desired.  Each hop is unique and will have its own set of strengths and weaknesses. A single hop is nothing to be scared of.  Two Hearted Ale by Bell's Brewing has only Centennial hops. And I'm sure there are more. In fact Mikkeller puts our a whole series of single hop beers. It's a great way to learn the hops.

IPA... India Pale Ale. This is a classic style, derived from Great Britian.  It has more hops than a traditional Pale Ale or Bitter, and a higher IBU factor.  Typically IPAs have higher alcohol content as well, to help give balance. In all, they are balances toward the bitter... Some may say unbalanced.

Crisp and bold in flavor. There is the strong hops presence through and through in this beer.  Nice aroma and is say pretty balanced from bitter to flavor and aroma. I tend to like the IPAs balanced, East Coast style.

The Simcoe hop has both high alpha acid content and high myrcene acids, lending to bittering and flavor/aroma respectively.  The aroma is described as "bothy fruity and an herbal piney earthy fragrance," as found on the Beer Legends site.  It's somewhat of a controversial hop.  Some beer geeks simply don't like it, calling it cat piss.  It is most likely a result of the high myrcene levels in this hop.  The aroma qualities are great, for better or for worse.

This one poured a burnt orange color and quite cloudy.  The off white head is reminiscent of the overly oxidized IPA I once brewed. Is the browning a sign if oxidation, like an apple turns brown after a few minutes?

I love the Imperial IPAs... I keep coming back to storage care.  With the IPAs, The answer is to cool them promptly, keep them cold and drink fresh.  I typically prefer to keep beer around for awhile to build and maintain a healthy variety of options. With the IPAs it important to simply enjoy the moment!  After all, who says you have a guarantee on life tomorrow?

The big takeaway:  I like the idea of an Imperial with a single hop.  It's a great way to discover the flavor and aromas of that particular hop. Commercially there is a fear alienating some customers, especially with Simcoe, of which many drinkers either have a love or hate relationship.
Posted by Unknown at 7:30 AM