Our local Homebrew Club (VCHBG) participated in a home brewing demonstration the other weekend.  I took a few photos of the various parts of the process.  I'm continually reminded of how simple it really can be to make great beer.

I don't want to downplay the art, knowledge, technical experience, ingredients, patience, and equipment that a lot of good homebrewers obtain over time.  And like anything else, this  knowledge and experience play a huge part in the success of an endeavor.  In reality, only a few items are necessary to brew a high quality drinkable beer.  With only a small investment you too can get started (~$100 or so).

What I want to illustrate here is the beautiful simplicity of making beer.  Beer has 4 ingredients.  Making beer has really only 4 steps.  And this is all grain brewing!  With extract kits, you can actually save a step.

Just as simple as making pie.  Easy as pie, they may say.

1. Mash - This is the process of taking the malted barley, crushing it, and converting the starches into more basic sugars, which can be eaten by the yeast and converted to alcohol.  The basics are to let the grains bathe in warm water (about 152F) for an hour.  After this conversion has taken place, we separate the sugary liquid (called wort) from the grains and get ready for the next step.  (There are multiple variables to this process, and it all revolves around chemistry.  It can almost be this simple though.) 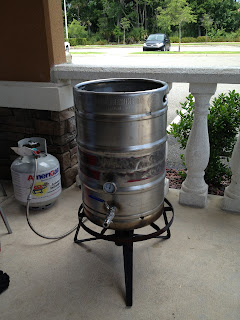 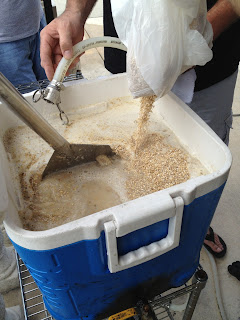 2. Boil - This is the stage where the hops get introduces.  Generally the wort will boil for an hour.  This time is used to sanitize the wort as well as boil off unwanted chemicals naturally occuring in the grain.  Equally important, the hops are added.  The amount and length of time the hops are in the boil has a drastic effect on the flavor and bitterness levels extracted from them. 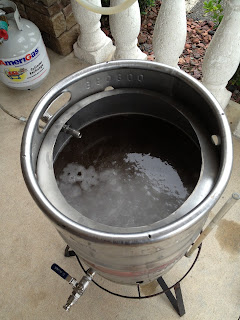 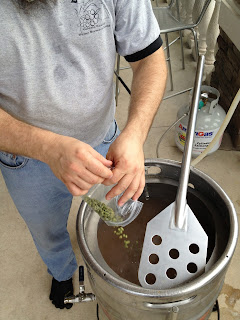 3.Ferment - Following the boil, it's important to cool the beer to fermentation temperature quickly.  An ice bath and/or wort chiller are generally incorporated.  (In the case of this past weekend, we went with a non-chill method of brewing.  By putting the boiling hot wort directly to the kegs, we can enclose the wort and let cool naturally over 12-24 hours.  Self contained in the kegs, there isn't a possibility for  the wort to get exposed to anything unwanted.)  Once cool, about 70 degrees or so, aerate the wort (shaking it up real good will work) and then add (pitch) the yeast to the wort.  Cover, put an air lock on it, and wait a few weeks.  Temperature control is important, but for simplicity keep in it a cool area of the house or in the basement (unless you are in Florida like me).

4. Package (bottle or keg) - Upon the completion of fermentation, bottling of kegging the beer is the last step.  For bottling, some additional fermentable sugars are added to the beer (it is beer at this time) and then it is put into the bottles.  The added sugar will ferment, creating the carbonation inside the bottle.  This is called bottle conditioning.  For kegging, you can "force carbonate" the beer, by turning up the pressure on the CO2 tank attached to the keg.  After a few weeks in the bottle it will be fully carbonated and ready to drink.  In the keg, it can be ready in just a few days, or hours.

Earlier I mentioned skipping a step with extract brewing.  Most brewers begin by using malt extract, which is nothing more than condensed wort.  This added to water during the boil will provide all the necessary fermentable sugars.  It is true brewing, just without the grain and mash step.