Wait a minute!  St. Patrick's Day was in March.  This is three months later.  Yep.  And I'm now the proud owner of a magnetic bottle opener and koozie, thanks to the fine folks at MillerCoors and Killian's. 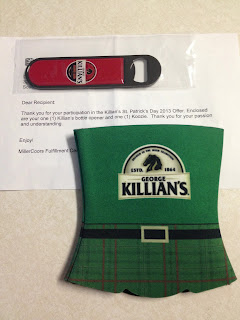 The social networks got into action regarding this free pint glass giveaway in March and with the unexpected flurry of interest they quickly had all the pint glasses claimed.  To much disappointment, I and many of my friends received the same email. 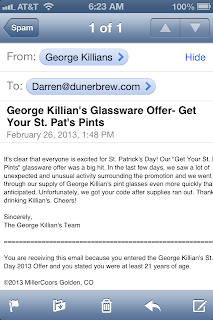 Read about it more in Part 1 of this saga.

And then I saw where some people have sent a complaint email, and were offered a concession prize, of sorts.  A bottle opener and koozie.  Hmm?  Sounds like a good idea!  And here is where Part 2 enters the drama.

And now, with the grand finale of actually receiving the product, this story will come to a close.  But forever I'll be grateful to the good people at MillerCoors for some awesome stuff, and good blog fodder.