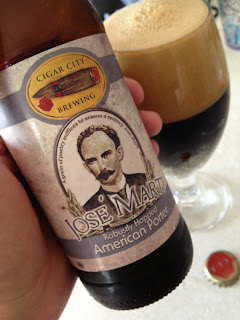 Surprisingly balanced. The Jose Marti American Porter from Cigar City Brewing boasts high hopping levels to give an IBU of 65... Much higher than one would expect from a porter. Yet this is called an American Porter. (In general the American title addition lends to an increased amount of hopping.  It's not the rule but seems to be the way things work.)

This beer pours deep brown in color with an ivory head.  Hops and  malt are in the aroma with hints of toffee and vanilla.  Dark malty goodness is present as to be expected...without too much sweetness. Hop bitterness helps cancel the sweet while maintaining balance. A lingering bitterness persists.  Mouthfeel is silky with a nice little bite at the finish.  There are some hints of chocolate in the flavor, dark chocolate.   It has a nice full dark malty flavor (not too roasty), like a porter should have.  It's pretty good. 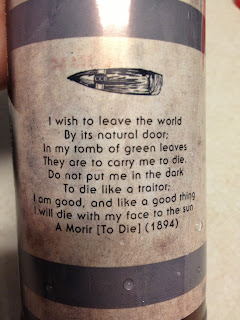 And who is this Jose Marti guy?  Well, it seems a little Cuban history will give us the answer. In short, he
was an influential Cuban political activist, writer and poet around the time  Cuba gained independence from Spain in the late 19th century.  Fighting for independence and freedom, his life was eternalized by his words and deeds.  An additional remembrance for Jose Marti is to be found in this beer.