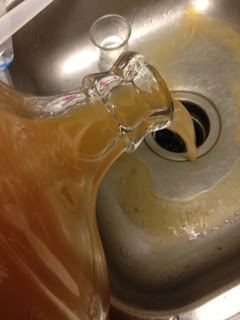 In a word.  Disaster!  Ugh, and I was so excited about it.

My thought... what is a little rubber stopper going to hurt.  Fortunately, I had another #6.5, only this time remembered that the air lock actually forces the opening open, leaving it overall larger and not able to fall in.  I made that work, and decided to forget about the stoppers in the bottom.

As you may know, it took awhile for this cider to even begin to ferment, and I had an update about a week ago.  I was rather excited when I finally saw some fermentation activity. 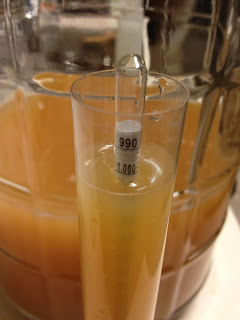 After another week, I decided it was time to take a gravity reading, and it hit me as I removed the airlock that there  may be a problem.  The smell of soaked rubber immediately filled the room.  The gravity was great, and after taking the gravity I took a reluctant sip of the cider.  Yep, nasty rubber taste.  I'm not sure this would have ever left, especially with the stoppers still sitting in the bottom.

I expected the stoppers to be eaten up and only half there, with the other halves absorbed into this raunchy solution.  Down the drain....

I never want to do this again. 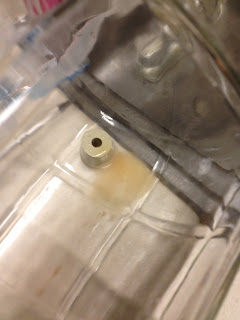