My Favorite Label (So Far)

Which came first, the label idea or the name of the beer?  In this case, it may very well have been the label idea.  We were in DC in March of this year.  We toured the Capital and I learned that the fresco on the capital dome is called the Apotheosis of Washington.  Check it out here.  In short, George Washington in on a throne and angels (representing the states) are gathered around and worshiping as if he were a deity.

I was shocked and appalled!  How could this possibly be?  After all this is a Christian nation and the founding fathers were all Evangelical Christians, right?  Why wasn't Jesus on the Capital dome?  Or the Ten Commandments?  Hmm, oh yeah.  Maybe it's not so much that way after all.

So naturally, it was a great idea for a beer and beer label...My Apotheosis Porter. 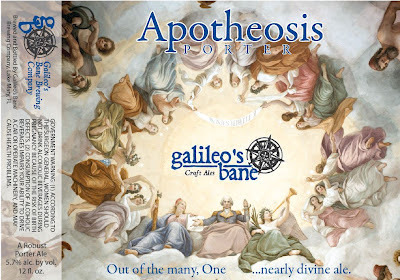