I was surprised on multiple counts with the Home Brew Competition at the Daytona Beerfest.  First of all, I was the winner!  Secondly, the beer I thought would do the worst was the one that won.  And my favorite...the worst. 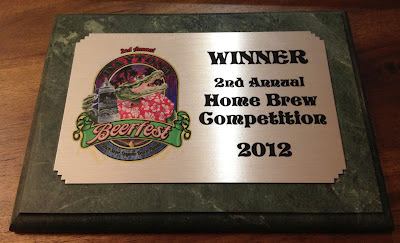 But first, you can get a recap of the brews I entered and my thoughts going into the competition here.

The scoring was different than the BJCP scores.  Basically, they kept to the 5 categories of  Aroma, Flavor, Mouthfeel, Exemplify Style, and Overall Impression, with a 0-4 scale for each, totaling 20 points for a perfect score.  There were three judges and the sum total was the score.  Perfection would be 60 points.

1. Independence Ale 2012: 41.5 points.  Aroma ranked highest (4, 4, and 3.5).  The citrus and floral aromas were picked up.  The Mouthfeel and Overall Impression both ranked low.  A note was made of a slightly off flavor.  One comment was that is "overall lacks soul".  Ouch!  And I was so proud of this one.

2. Isis Imperial:  29.5 points.  Ugh.  This was one of my favorite, but it was clearly oxidized.  I'm calling it a bad bottle... at the same time, now that I'm looking for it, I tend to taste it too.  I'm not sure if the dry hopping process may be the contributing factor to the oxidation.  With the APA and IPAs freshness is key and both of these had sat around the house, in and out of refrigeration a few time.

3. Eldorado:  51 Points.  This was well received and aroma scored 4, 4, and 3.5 here too.  As a Specialty Beer, they wanted more description of the intent of the beer with a base style identified.  One remarked they judged it as a Belgian Specialty, which wasn't the case.  I used Wyeast 1056 American Ale.  With more detail on the style, intent and more information,  would have probably earned 4s instead of 3s and a 3.5 in Exemplify Style (which would have put this as the top score).  The Overall Impression was at 3.5 for all three judges, which is strong.  For the next competition, I'm stating more intent and description, even if I have to make up a good story... hey, why not?

4. Apotheosis Porter:  52 points (of 60).  The winner!  Unanimous 4s on Exemplify Style.  Overall Impression, "Great porter!" and "Well done."  Nice.  It was strongly suggested that I enter this in the upcoming Sunshine Challenge, which is a BJCP Competition...this big competition in the area.  I was told, this was very close to the "perfect porter."  Fingers crossed.