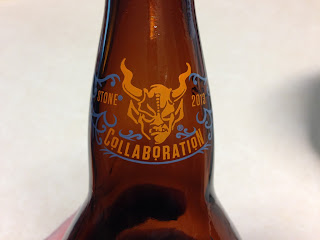 Note:  With the 2015 release of the Woot Stout, there is chatter lately revolving around this beer.  If you happened to find it I hope you purchased a bottle or two, as indications are they are/were moving fast off the shelves.  The following review was written in July 2013 when the Woot Stout was initially released.  My friend Anti-Hero V and I decided to each write a review and publish each other's on their sites.  This is the review I wrote two years ago.

What is so special about Wil Wheaton?  And who is he anyway?  And why do any of us care?  And while we are at it, how did he get this gig, doing a collaboration beer with Stone Brewing?  And Farking?

Wheaton played Wesley Crusher on Star Trek, The Next Generation.  Oh, cool.  Yeah I remember now, we used to make fun of him, the whiny kid.  What was his purpose on the show again?  Wow, so a supporting role in a successful sci-fi TV show must make you worthy of brewing a beer.  Turns out he is more than this.  A big internet and social media nerd, he happens to be a homebrewer too.  Ah, the beer connection.  OK.  And I can identify somewhat with the whole social media nerd thing.  I prefer the term geek.

Farking?  The other leg of this tripod collaboration is Drew Curtis, the creator of fark.com.  OK.  I've heard of that site and visited it a few times, I think.  I've never heard of him and still don't know what is so special about Fark or Drew Curtis (that is his name, right?).  Oh, I could do some additional research, but I'm diving into this 13% ABV beer, and research now just seems like to much hard work.

Of course, without Stone Brewing, this beer wouldn't exist.  I wish I could grow my hair and a big beard like Greg Koch, but in all honesty I kinda liked his clean cut look better.  When did the hippy revolution rear it's ugly head in the 21st Century?  I love Stone's stuff, and their story is a great one.  (I love when hard work pays off in the form of success.)  I became excited about this beer only through more social media interaction.

I promise to get into the review...  If the difficulty in obtaining a beer is in direct proportion to the quality and taste of the beer, then this will be one of the best beers in the world (Westvleteren notwithstanding).  Last weekend, the local ABC Fine Wine and Spirits store said they had 4 cases that would go on sale Monday.  Great!  I showed up Monday...no they can't sell them until Thursday. OK.  I stopped by over lunch on Thursday, only to find out that the rumor was true.  It turns out, their cases went to some Mom-n-Pop store in a nearby rural county.  "No sir, this beer is a bit different than Bud Light."

So I called Total Wine.  They had them and would hold two for me.  Great!  I show up to the store on Friday, to find they didn't have them for me and were all sold out.  It turns out I inadvertently called the other store in town, another several miles away. (I blame Siri.)  Ugh.  Off I go to the other location, and like magic they had two bottles with my name on it.  This better be the best beer in the world. 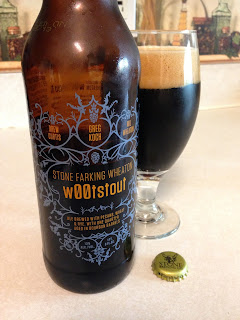 It poured black with a tan leather looking head. (It was so special, I put the video of it on Instagram.)

A little banana on the nose.  Fairly nutty type aroma...perhaps the pecans.  It is quite inviting.

The beer is thick, malty, complex.  I sense raisins, and those other items associated with a dark heavy high alcohol Imperial Stouts.  There is a lot going on.  It is rather clean for a stout.  Alcohol taste is kept in check, and overall it is balanced for the style.  I don't taste the pecans much, or maybe some.  I think that tangy finish is due to the rye.  And the wheat gives some body.  Wheaton...wheat.  I guess it has to be that way.

As it warms, the finish becomes more interesting, with a lifting sensation of sorts.  It's good!  Typical of some of the better Imperial Stouts I've had.  The finish is a little odd, typical for the style.

I ask myself, if Wesley Crusher can make a good beer, how much better would the beer be that Jean-Luc Picard had a hand in?

Collaborations can become gimmicky, and this is a perfect example.  But dang it if they didn't put it out there and everyone was quick to jump on and buy it all up.  And I'm one of the suckers.

If nothing else in brewing, I've learned patience, and in 2-3 years when I pull out my second bottle of W00tstout for a bottle sharing, they will all look at me in amazement and we will all enjoy this beer with age.

STOP THE PRESSES!  My wife just brought me some peanut butter M&Ms.  "Try these then drink the beer."  She discovered an amazement.  WOW!!!  It's the crispiness of the candy coating.  Quite the pairing.  This is a great beer!  This is terrific beer! 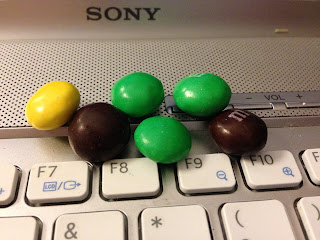 We've now discovered the previously unknown secret of Wil Wheaton's success.  It can be found in a little candy which "melts in the mouth, not in the hands."