There is a predisposition in my mind telling me I'm going to like this beer.  I've anticipated the release and put a few bottles on hold at the local ABC Fine Wine and Spirits.  It's a 10.8% West Coast IPA.  And from a great brewery.  Of course, it must be the Stone RuinTen.  Available in the 22oz bomber bottles. 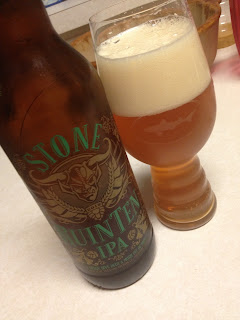 This was their special brew in 2012 for the 10th Anniversary of their Ruination IPA.  So well received, it has become a rerun, of sorts and they have brewed it again in 2013.

It pours a fairly clear golden color, like most of the Imperial IPAs.  A 1.5" head formed as I poured it into the IPA Glass.  (I love my IPA Glass, thanks to friend Vinny with distributor S.R. Perrott.  He'll say I earned it.  I'll say, "if you don't ask you will never receive.")

Aroma is strong.  Almost an odor of wet dishcloth...yeah, do you sense it too?  Bet they didn't anticipate that one!  I had to smell the side of the glass to make sure I dried it with a good towel...not a smelly one.  I think it is just the hops...of course it's the hops.  There are a ton of them in this beer.  When it hits your lips, it is instant love.  Lip licking hoppy goodness is here.  Bright.  Brilliant.  Hop flavor is off the chart.  A smooth mouthfeel, with a warming finish.  Excellent!  Oh, give me another sip! 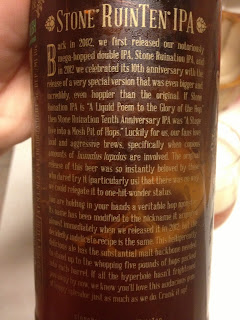 The aroma remains tough, almost chewy, and then after awhile it does mellow out some.  But once you sip it's like liquid gold.  Intense, delicious, piney.  The finish is just right.  A slight lift on the palette and then you want to lick your lips.  (Yes, this paragraph almost a paraphrase of the previous.  That's OK though, there are plenty of literary examples of such style.  Right?)

Let's see, how does this compare to other Imperial IPAs of similar stature?  Hopslam from Bell's Brewing is sweeter.  This carries a bit more pungency to it.  The Hoptimum by Sierra Nevada is another favorite, but more tame than this one.  Hoptimum is maybe more balanced.

Nice clarity after it warms up a little.  Good lacing on the glass, and during the time of this initial writing I've aquired 9 Instagram Hearts already...oops, 10 now.  Yeah, they love my photo. 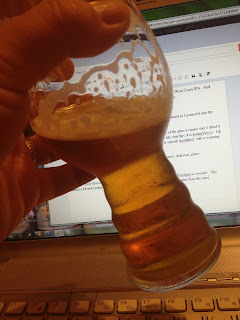 And what I love most about the beers in the bombers, is that at the end of the first glass there is still another waiting for me.

Of course I'm drinking this bottle, and I still have one to age.  It would be interesting to see how it ages.  Or, perhaps I aught to just drink it fresh.  After all, it's very good.

And perhaps I'm not such a bad reviewer after all, eh?  Go find this beer while you can!