A year ago today at the Reason Rally 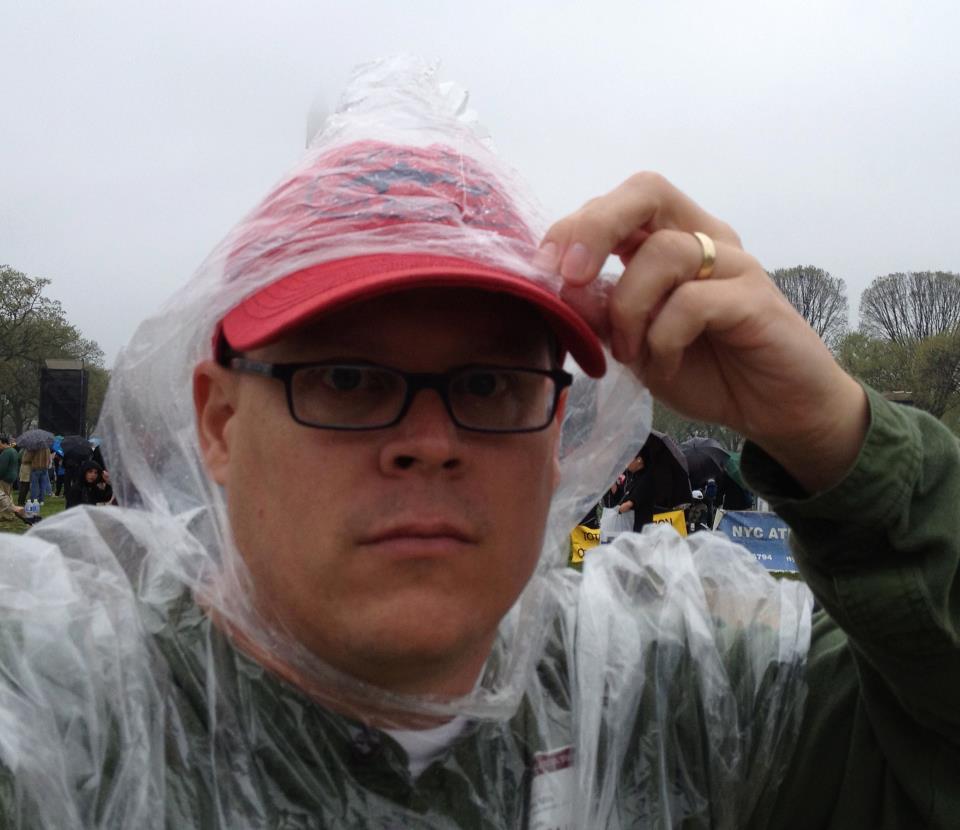 It was a rainy and chilly day.  It was a year ago today.  In the morning we toured the US Capitol, where we learned there is an imaginary line that runs down the center of the Rotunda, which separates the Senators from the House Representatives.  Neither group crosses the line into the other halves' territory, nor do they fraternize with each other.  Two exclusive clubs sharing the same space.  Each with their own agendas and practices.  You simply don't mix the two chambers...the two separate communities.

My son's 8th Grade trip to DC brought us to town, as part of the group from our small Christian school, of which our family has been a part since his kindergarten year.  Many in our group I consider friends...in a large sense this has been (and is) our community.

Like the rogue Senator who dares to cross that line of separation in the Capitol, at the completion of our tour I walked west from Capitol Hill toward the Washington Memorial, where assembled in the National Mall was the a very large gathering of Atheists, Agnostics, and Freethinkers... all part of the Reason Rally.

With my poncho for protection and armed only with my iPhone and intellect, I traversed into what many from our group may call hostile or enemy territory.  Me?  I felt quite welcome and perhaps a little at home even.  The Rally was filled with speakers, celebrities, and entertainers, all touting freedom from faith and making a statement for respect in the broader world  (it seems all groups feel the "world" is against them... and perhaps rightly so for most of the groups).  Some of these speakers I admire, some were new to me, and some I still have no idea who they are.  And all is well.

Adam Savage from Mythbusters spoke, and though I missed him, I looked up his speech later.  I've always though him witty, enthusiastic and intelligent.  I haven't changed my assessment.  Michael Shermer spoke.  I've read several of his books, including "Why People Believe Weird Things" and "The Believing Brain."   He is the editor of Skeptic Magazine and the Skeptics Society.  And of course, a rally of atheists wouldn't be complete without Richard Dawkins as the keynote speaker.  Heard of this evil man?  He wrote
"The God Delusion."  An evolutionary biologist, Dawkins has long been an evangelistic face (if that is the proper term) for evolutionary theory.

Former Christian pastor and evangelical Dan Barker spoke.  He's now the co-president of the Freedom From Religion Foundation.  His book, "Godless" tells of his journey from one of the faithful to one of the leading faithless voices in America.  Another "fallen angel" was Nate Phelps, son of the infamous pastor of Westboro Baptist Church.  You know Westboro as the "God Hates Fags" sign-wielding wacky, hateful, shameful, bigots, who protest at funerals for America's heros and about every other event they can think of.  It certainly doesn't sound to difficult to be "reasonable" for escaping such a group.  But it was a difficult transition for him, testimony to the dangers of religion gone awry.

British singer and entertainer Tim Minchin, whom I've only heard of previously, sang perhaps some of the catchiest and most irreverent songs ever written.  The freedom to laugh was encouraging, and he is a very good entertainer.  At the same time, this is the thing which bothered me most the entire day.  (Back to that in a minute.) 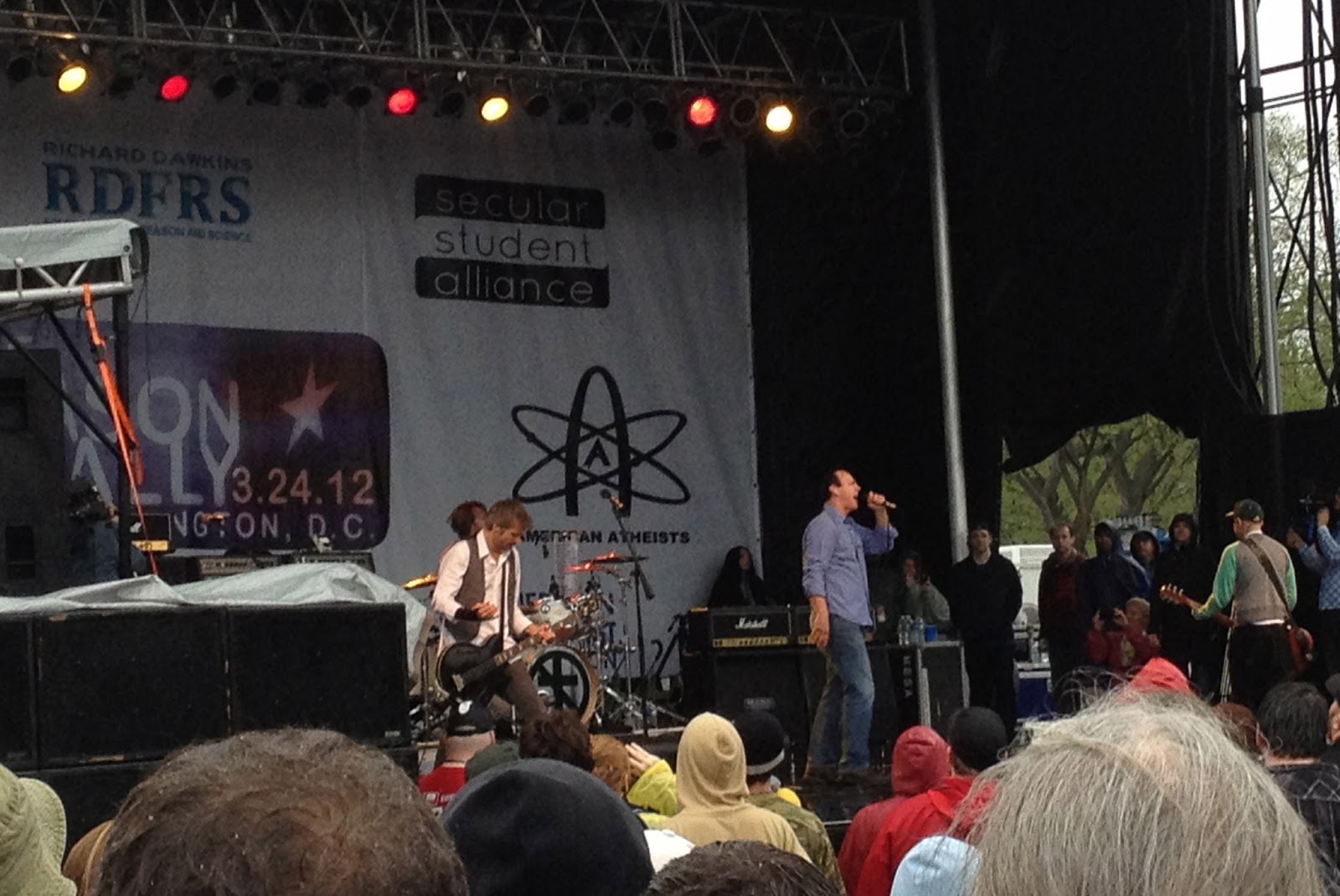 Legendary punk rock band Bad Religion performed as bookends to the event, opening with the singing of the National Anthem and saying of the Pledge of Allegiance, in it's state prior to 1954 (see more), omitting the "under god" in the central phrase.  After all, this is the only way this group approves of the Pledge.  (And arguably they are correct.  "Under Allah" in the Pledge would be intolerable.)  The hour long concert at the end of the event solidified me as a fan.  Their music is fast, catchy, intelligent, and pushes the envelope (and has been for 30+ years).  Not your ordinary rockers, these guys have doctorate degrees.  The lead singer, Greg Graffin is a college professor and scientist.  I've enjoyed his book "Anarchy Evolution" very much.  (I read this initially as part of my rock star autobiography series of books.) 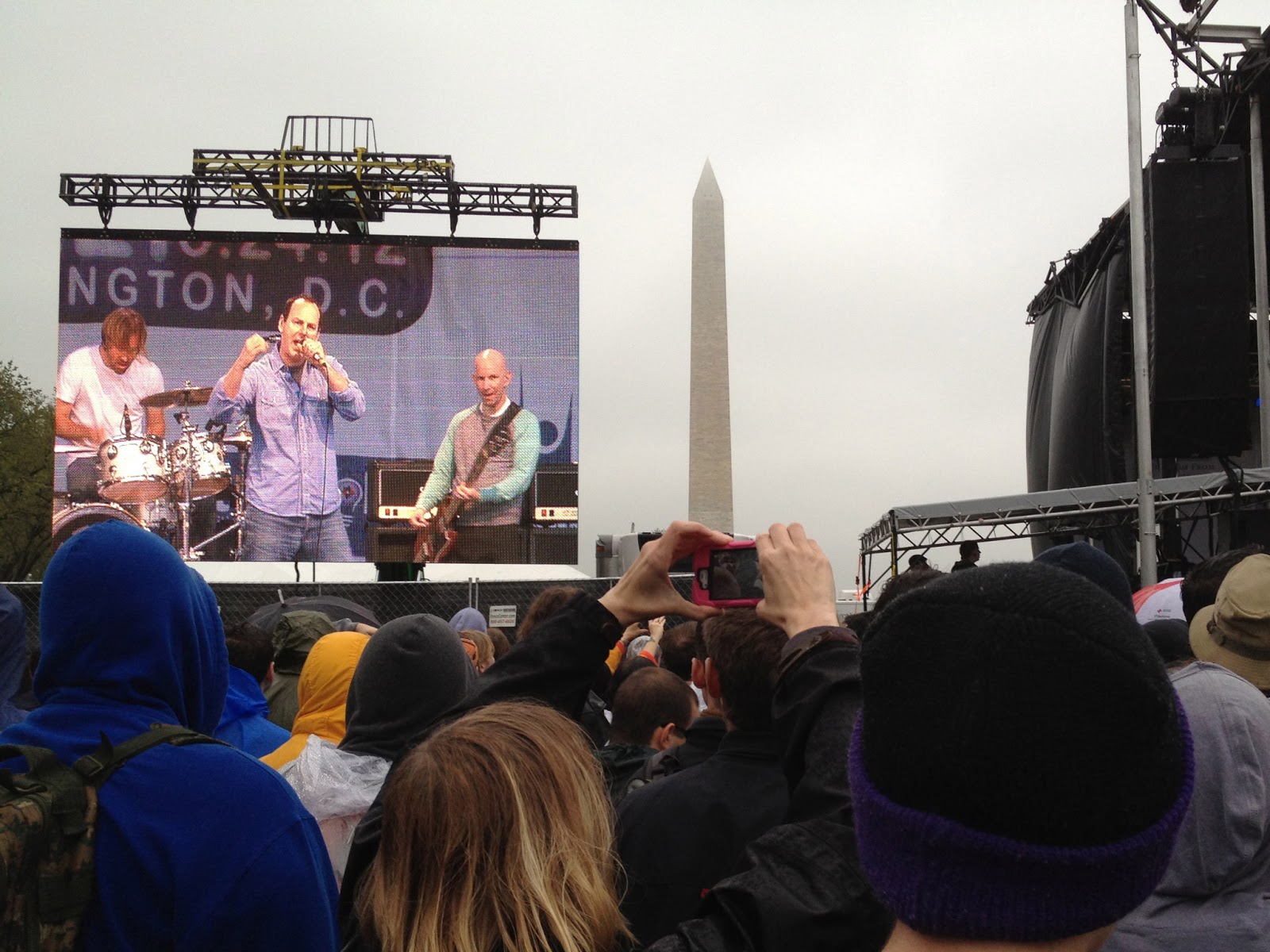 I've always been the guy who could fit in with any crowd.  I entered the University of Florida campus knowing not one person.  In junior high, we moved and I hopped on a bus leading to the inner city, again not knowing anyone.  I'm still the typical wall flower most of the time, but give me a group and I can fit in.  Of course nowadays some groups are more difficult to fit in with, and I'll let you decide which I may or may not be the most comfortable.

Soapbox time:  The one thing that left a bad taste for me from the Reason Rally was the conflicting message of wanting respect and the "offensive" nature of the entertainment.  What do I mean?  The entertainment was full of rated R language and off color humor.  One song titled "The Pope Song" repeats a particular four letter word referenced directly to the Pope.  All in good fun!  And without the threat of burning in hell for eternity, there is freedom in singing such a song.  I can see it especially for a reformed Catholic who had been hurt badly by the church.  At the same time, this type of language and humor I find at odds with the objective of, as a group, gaining respect from a largely religious country.  Respect us!  And we'll fill your ears with filthy language!  I just don't get it.

There was a family component to this event as well.  Of course, I wouldn't want my child there with this type of language and adult content.  At the end of the event, there was an award for children, granting them a scholarship to some freethinking type summer camp.  Within a few minutes of the award, while the band prepared for the concert, a comedian took the stage.  Course humor and language quickly ensued as be began his routine.  The kids were still exiting the stage.  I was embarrassed for their families.  There is a place for humor, and possibly a place for off-color humor.  I'm not convinced this helped the cause of the day.

Of course I had no part in the planning or execution of this event, and I don't know if I was the only one who found this dynamic at odds with the overall intent.  I hope I wasn't the only reasonable one in the crowd whom this bothered.

In life, while we may not be able to straddle the fence, I'm finding a way to stand with feet on both sides of the imaginary line.  That line often serves no more value than keeping communities separate....communities which could actually benefit from each other.

I realize this post has nothing to do with beer.  At the same time, I've found great community this past year among fellow beer geeks and brewers.  I'm more and more convinced that community is what you make it, and any group bonded by a common interest will support members in that community.  No man is an island...


*In this photo Michael Shermer was videoing with his iPhone, soon to post on You Tube.  As an added bonus to this blog, that video can be seen here.  Do you see me?