Differences in Porter and Stout

Both are dark, both are malty.  Both come from the same region historically.  What are the differences (and similarities) between a Porter and a Stout?

The Beer Judges Certification Program (BJCP) style guidelines have three subcategories for Porter and 6 for stout.  Let's look at a few comparative sub-styles, as an example, and look at the "Vital Statistics" of each, to see how they stack up and what we may discover.

Among the three, there are actually more differences between the Dry and Sweet stout than with either of them and the Porter.  The chart below illustrates this too, while using the average number from of each category above. 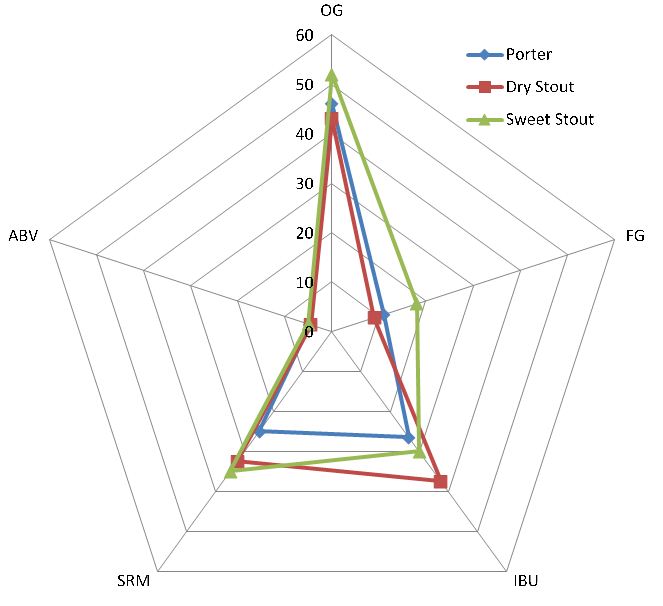 The subtle differences shown by the data may be stated as such; that on average the Porter will be lighter in color (SRM) and less bitter (IBU) than the two Stouts.  The only category where the two Stouts are more closely similar to each other than either of them are with the Porter is with the SRM.  And this may not be too surprising.

A key difference between the styles is the use of Roasted Barley with the brewing of Stouts, whereas Porters will generally use darker malts (chocolate and/or Black Patent malt) and not the un-malted Roasted Barley.

The 2008 BJCP Style Guideline has the following to say for each regarding the Overall Impression of these similar styles.
Historically the Stout evolved from the Porter, initially as the adjective, as in Stout Porter.  While Stout took off in popularity, with the help of Guinness, the Porter almost became extinct as a style.  The histories of the two styles can be interesting, if you are interested.