A Review: Another great Imperial Stout?

The pour was impressive, deep black, thick looking, with the formation of a nice off-white/tan head.  I was ready to claim this an instant winner!  Another Oak Aged Yeti, World Wide Stout, Narwhal?  Wow, and for Sam Adams... nice. 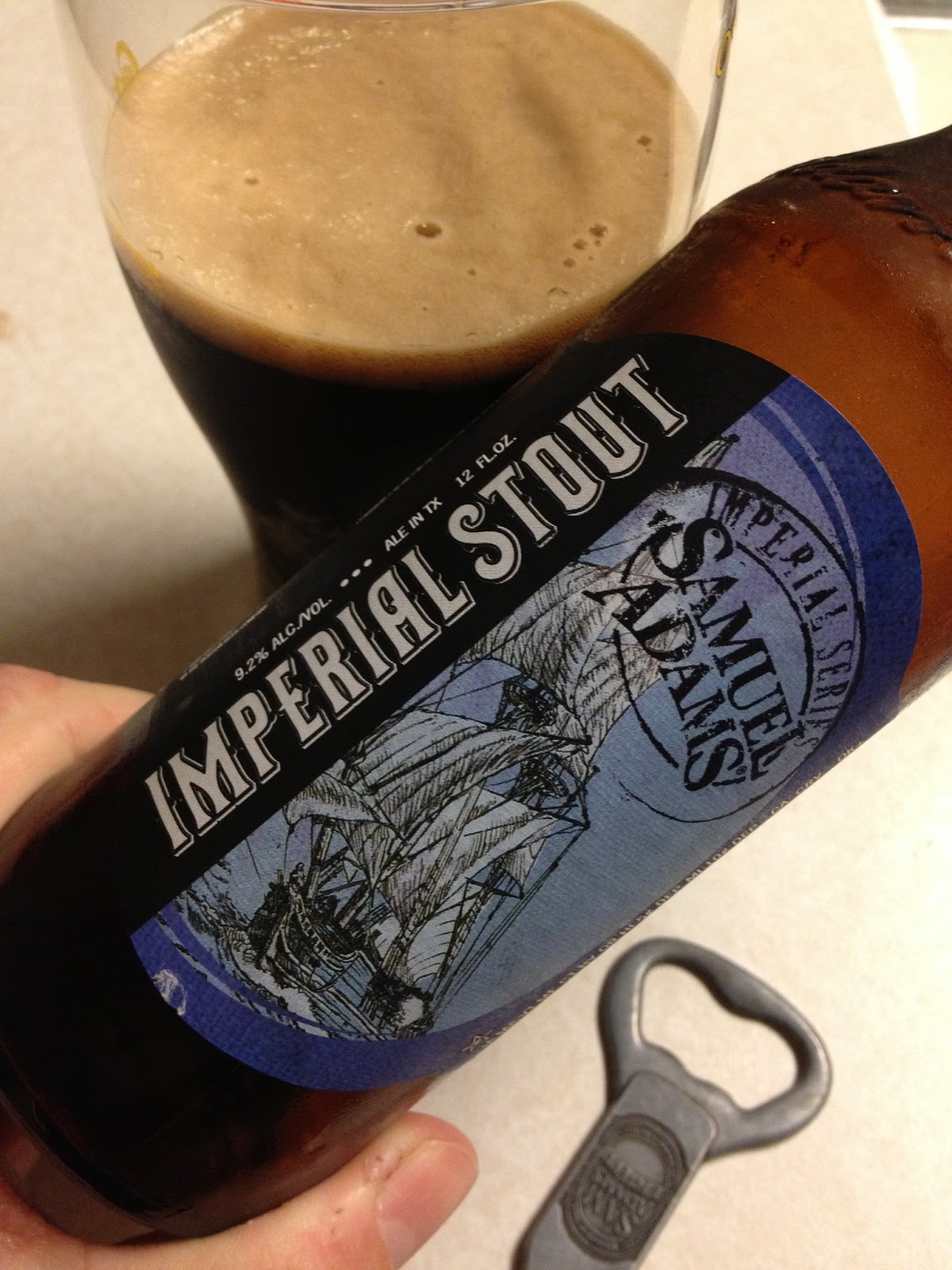 Presently drinking a Samuel Adams Imperial Stout, with 9.2% ABV.  I picked this up the other day, eager to give it a try.  Best known for their Boston Lager, and followed by the seasonal beers often featured by restaurants (Like Outback Streakhouse) who aren't beer centric but want something the aficionado can at least partially appreciate.  Most of the Sam Seasonals are very nice.

Of course by definition, Samuel Adams is a craft brewery; small, independent, and traditional (the full definition by the Brewers Association can be seen here).  Success over the years has brought the company to the larger side of small.

Along with the standards, Samuel Adams has recently begun to experiment with more with their "Limited Release" beers, as a way to capture the growing Craft Beer drinkers, who aren't overly interested in a Boston Lager.  Examples can be found in the various IPA styles brewed, each with flavors of the base styles indicated (there was a nice sampler 12 pack with the IPAs, which is an interesting find).  Good stuff, but I wouldn't say great.  And this beer follows the same vein, labelled as their "Imperial Series".

But enough background.  With anticipation of another fantastic Imperial Stout, I approached this monster.  The distinct nose, malty, bright, and with a slight sourness is followed by similar tastes, complex, almost invasive, and then a strange lingering bitter finish.  "I hope this beer gets better as it warms up some," I thought to myself.

And after composing the above paragraphs, the tan head is still there, which is still nice.  The mouth-feel is better, and not so thin as it seemed initially.  The aroma is complex and inviting.  I only wonder from where that strange finish flavor comes.  I look to the description on the back label and notice the anise flavor (the stuff from which licorice is made).  Have they added that to this beer?  I can get the dark chocolate tones mentioned, and the coffee flavors will come from the roasted barley.  The website featuring this beer lends additional information.  Upon review, everything on the ingredient list I tend to like, including the East Kent Goldings hops.  The seven different malt additions will result in some complexity for sure...perhaps overkill?  The smoked malt, though, stands out potentially as a reason I'm not overly fond of this one. 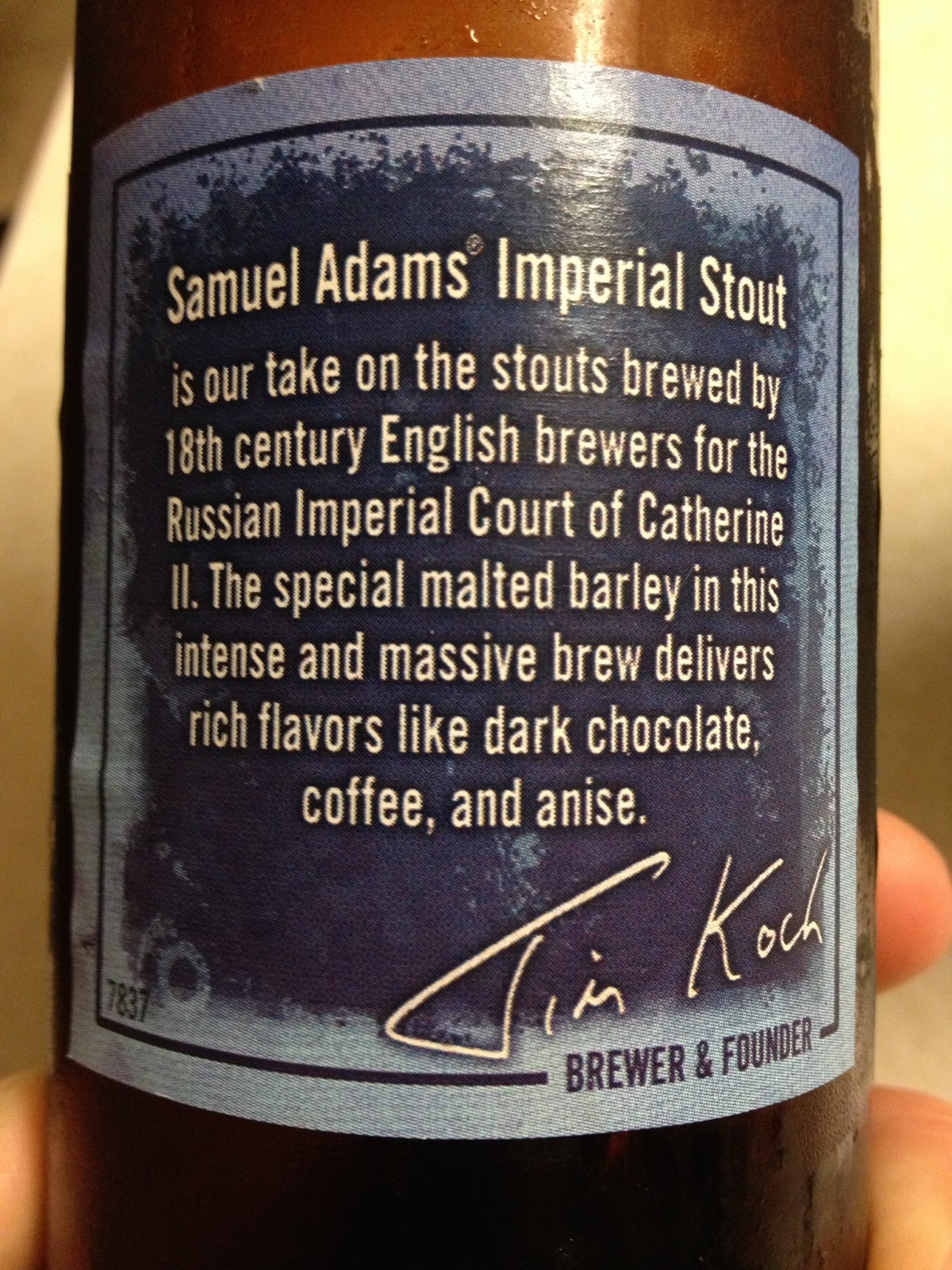 End note:  When the "18th century English brewers" made this style for export, now called Russian Imperial Stout, do you think they really went through all the trouble to include 7 malt varieties?  It seems like a lot of work, with little payoff... almost like a marketing bragging right.  Just my take, but if it works and help to sell the beer, I say good job Sam Adams.
Posted by Unknown at 9:00 AM