A Beer & Food Pairing Event. Well worth it.

An opportunity to sample great beers and eat some interesting food!  Who can pass that up?  Not me, evidently.  Our friends at Beer Geek Speak organize these tastings, and frankly do a very nice job.  It is worth the while to go if you can.

Dogfish Head was the featured brewery and we were pleased to have Chuck, the regional sales representative, there to talk about each of the beers, as well as impart onto us some company information, history, etc.

The details on the beer and food can be seen in the photo to the right.  Most of the pertinent information is on that sheet.  The following commentary will add to it.  Let's start at the top.

1. Saison du Buff:  This collaboration ale between Dogfish, Stone, and Victory was named for an agreement between the three breweries which was made years ago, with a focus on educating, promoting, creating, and supporting Craft Brewing.  Saison du Buff was first brewed in 2012, with each of the three breweries making a batch.  We also learned that every other year this beer will be made again (at all three breweries).  It is very tasty.  I was surprised to hear that this beer tastes distinctively different from each brewery.  I've only had two of the three so far (Victory and Dogfish) and really expected them to all taste about the same.  I guess not.  The effervescent flavor of the beer does pair well with the Caprese Bites... Call it the appetizer. 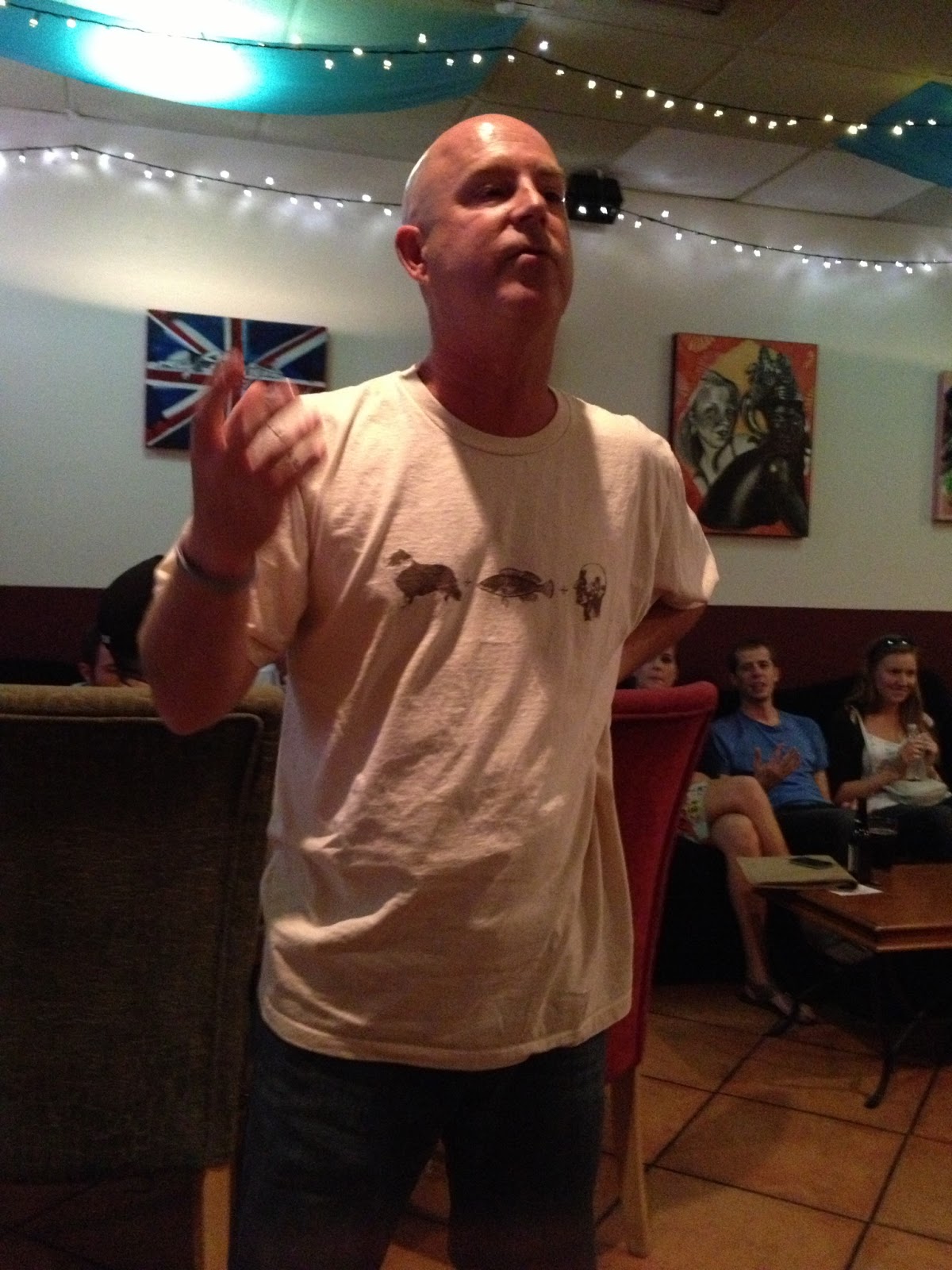 2. 60 Minute IPA with Hop Pickles: We learned that Dogfish Head on average has the highest ABV in their beers of all the other commercial breweries.  That being said, the 60 Minute IPA has to be one of the lower ABV beers.  The hop pickle (yes, only one) was surprisingly spicy.  In a combined effort with Brooklyn Brine pickling company, Dogfish provided 60 Minute IPA wort and hops to be added to the pickles.  Interesting.

3. 90 Minute IPA and Chicory Stout:  90 Minute IPA may be one of my favorite IPAs, and the Chicory Stout is solid.  Blend the two and you have a very nice beverage.  They call it the Black and Tanner, named after a frequent customer of The Abbey in Deland.  The sweet cake, baked with Chicory Stout shows that dessert and beer do indeed go well together.

4. Urkontinent:  This beer is "a social collaboration of worldwide proportions," according to the DFH website.  Read more about it here.  The many flavors in the beer, paired with the pumpernickel, tart cherry preserves and peanut butter made for a nice 4th course.

5. Etrusca:  This is another of the Ancient Ale series of beers, with a nice story and details of 2,800 year old tombs and science.  With an ingredient list like the following, who can resist?

The backbone of the 8.5% ABV Birra Etrusca comes from two-row malted barley and an heirloom Italian wheat. Specialty ingredients include hazelnut flour, pomegranates, Italian chestnut honey, Delaware wildflower honey and clover honey. A handful of whole-flower hops are added, but the bulk of the bitterness comes from gentian root and the sarsaparilla-like Ethiopian myrrh resin.

More information here.  And another dessert with this beer.


Nutshell:  It made for a nice evening.  Highly recommended.