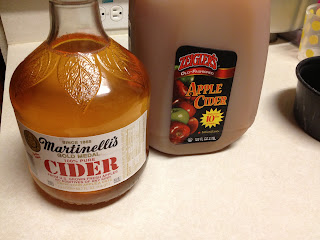 I was in the local Brew Shop the other day, and there was a carboy sitting there which was a brand new cider fermenting.  Basically, two gallons of cider straight into a carboy and yeast was added.  In a few weeks, it should be ready to drink.  Can it really be that easy?  Maybe so.

Inspired, I decided to do something similar.  We went to Target and found only 1 remaining gallon of the cider, but there was also a smaller glass jar of organic apple cider.  The jar was cool and could work for very small batches or something, so I decided to get both.  Plus, the differences would add to the uniqueness of this concoction, right?

Basic sugars will add alcohol and potentially make it a drier cider, so I decided to make up my own rules.  This is what was done.

1. Boil the following for ten minutes in one pint of water.  1/4 cup brown sugar, 1/4 cup corn sugar, 1/4tsp of cinnamon.  This is a super secret recipe for success in any cider (I just made that up, but it sounds solid to me).

3. I had some Wyeast 1056 in the refrigerator, left over from my yeast washing, so I decanted it, swirled the yeast to make a slurry.  I poured half of the slurry into the cider and the other I made into a new starter.

I just bought the 3 gallon glass carboy, and this will work perfect for the cider.  I'll let you know in a few weeks how it turns out.  Original Gravity was at 1.052.
Posted by Unknown at 10:00 AM